Where in the World Challenge: Canada

#2: Canada. So I'm thinking "what can I do for Canada, eh?" well, they have the flag, that's an obvious pick. I also thought of doing  a pretty landscape with mountains & trees & river, but eh I wasn't feeling it. Then I started thinking that Canada has supplied us with a lot of fantastic actors who have entertained us a lot over the years, to name a few: Michael J. Fox, Brendan Fraser, Keanu Reeves, Anna Paquin, Christopher Plummer, Rachel Mcadams, Ryan Reynolds, Ryan Gosling, the list goes on...So I thought maybe I should pick one of these gifts from Canada & pick a movie they have done & use that.

I picked 2, that just happen to have been in the same movie....Rachel McAdams & Ryan Gosling in "The Notebook". There were a lot of ideas I had for this movie, love letters, the costumes, dancing in the street, the kiss in the rain. I decided to go with a love letter & rain to portray the famous rain scene where he says "I wrote you 365 times".

Using a white on my ring finger & gray on the other fingers. With acrylic paints I used my fan brush & combined white & a light blue to make it look like it's raining. I used black & red for the letter on my ring finger. So here is my Canadian day design to celebrate the two lovely Canadian actors that attributed to this movie. 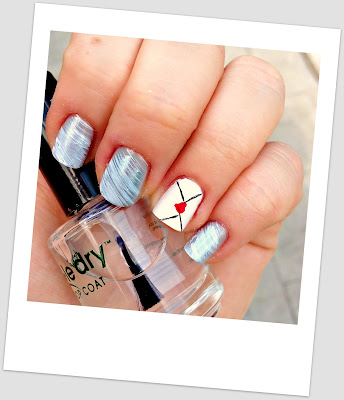 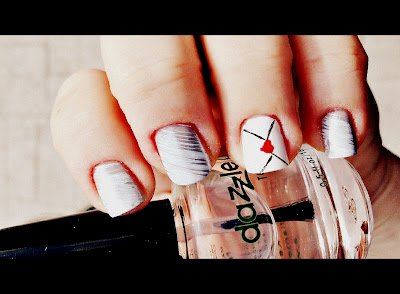 Posted by GelaNails at 4:49 PM

Email ThisBlogThis!Share to TwitterShare to FacebookShare to Pinterest
Labels: Where in the World Challenge