Ok, deep breath, this is the one I've been dreading. One of the reasons I had never tackled the 31 day challenge before is that I would see "water marble" on the list & panic. Never done one before, not sure if I'll do it again, but this is a challenge after all & I would be remiss if I did not push myself to complete each & every one.

I had to do a lot of research for this, the two main things that I was the most concerned about was cleanup & water bubbles. To take care of the water bubbles it's advised to let the water marble dry completely before putting on a top coat. To help with easier cleanup I have seen several suggestions, the most popular being to tape around the nails.

Here are a couple things I noticed; I really wanted to have some shimmer in the design, but using glitter polishes turned out to be a terrible idea, so I tired some metallic's & had similarly upsetting results. I found that if I dropped the polish in the middle of the cup it was hard to pull the toothpick through to make the design without breaking up the entire circle, so I put the drops in closer to the edge. When I finally found polishes that were working I stuck with them, I had to mix up cream polishes with shimmery so that it would spread right in the water.

Anyhow, I'm fairly happy with my result, even though I smudged it a bit. I don't think I will do this again any time soon as it is just way too time consuming & I think it looks better on ladies with longer nails. But in any case I'm glad I finally tried it out & who knows, I might tackle it again someday when I have a bunch of time to spare & I can experiment a bit more. That being said, this is my very first water marble EVER so, be gentle! 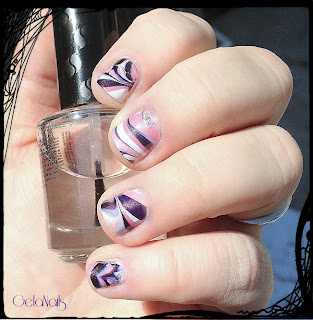 Posted by GelaNails at 9:26 AM